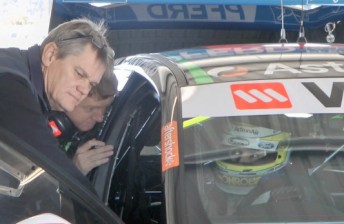 Ford Performance Racing’s heavy hitters made the trek to Winton Motor Raceway today, despite the fact that their team was not there.

Winterbottom drove D’Alberto’s Wilson Security-backed Falcon, completing a number of laps in the cars as both squads look to improve their on-track fortunes.

After FPR’s well-documented horror at Winton last round, the D’Alberto team concentrated on a number of stint-length runs on Dunlop’s soft tyre.

According to Winterbottom, the trip up the Hume Highway was well worth it.

“Coming up today was good. I came up with Campbell to have a run in his car and see how it is,” Winterbottom told Speedcafe.com from Winton.

“Tony and his team are very accommodating and they are obviously running our car, and that new partnership is working well.

“I think we found a few little things today. We haven’t reinvented the wheel, but we’re reevaluated some things.

“The good thing is that Tony and I have been hoping in and out of his car, and it has given us time to think. On a normal test day when it’s only you in the car, you do eight hours of non-stop, so you sometimes lose your thought pattern.

“This way forces you to get out and think about it for longer.

“We’ll go home now and have a think about it.”

Long-time Holden competitors TDR switched to FPR-built Fords this year, and team owner Al D’Alberto says that while on-track results have been hard to come by in the opening events, there are strong signs that their fortunes will turn around.

“We’ve got a good relationship with FPR and having Mark and Campbell here is one of the strengths of our partnership,” he told Speedcafe.com.

“The boys have been trying a lot of things today and it has been very productive. The true test will be at the next race meeting, but for now I’m confident we’ve made some inroads.”

Next Story Two new cars on the way for GRM