It was the second time that Hays, who has been supported by Vodafone Australia for several years, has strapped into a Sonic Motor Racing Services Mygale, however, his first day in January was held in atrocious weather conditions.

“My first ever drive in any sort of race car was back in January when the track was almost underwater after so much rain, it was great to get another crack in the dry conditions on Friday,” said Hays.

During his first day, Hays was guided by Sonic graduates Jamie Whincup and Nick Percat. Last Friday was more of a test day than an orientation day for the 16 year-old.

“It was really cool to have Jamie and Nick there. Jamie helped me out after my first session with the basics about the track while Nick was also helping me with my driving,” said Hays.

“The first half of Friday was spent getting used to driving a Formula Ford in the dry and I felt as though I continued to improved throughout the day.

“Overall, it was a great experience.”

Hays continued the testing on Saturday, however, this day was spent in a machine he is more familiar with – his Vodafone-backed Pro Gearbox Tony Kart – at Melbourne’s Todd Road circuit.  The Gold Coaster was joined by many of his fellow CIK Stars of Karting competitors at the venue across the weekend.

“There were a lot of drivers testing for the upcoming CIK Stars of Karting round and at the end of the day I finished up very happy with where I ended up,” said Hays.

“So far this year I haven’t had a good run in the opening two rounds but I’m confident of being able to turn it around in a couple of weeks time at round three.” 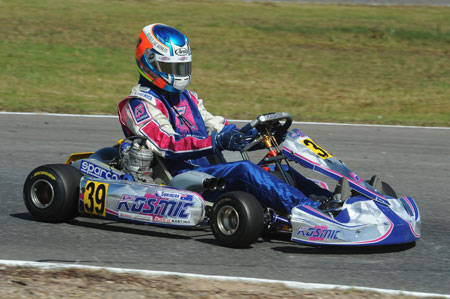 Next Story New goals for Jake Spencer in SoK