Perfect score for Stauffer in Queensland 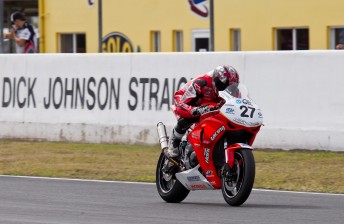 Perfect conditions at Queensland Raceway complemented a perfect run of results for Team Honda’s Jamie Stauffer who dominated both 17-lap races of round 5 of the QBE Australian Superbike Championship.

The polesitter was eager to convert his grid position to maximum points, an outcome that would re-energise his team which has faced an uncharacteristic struggle in the first half of the season.

Stauffer lowered his own lap record this morning to 1:09.125 to take a 2.423-second victory over Team Suzuki’s Josh Waters and Procon Maxima BMW’s Glenn Allerton.

Another good start this afternoon saw Stauffer win by a similar margin – 1.993 seconds separated him from Allerton who held off a charge from Stauffer’s teammate Wayne Maxwell.

“In the first race we got in front and just tried to maintain the lead really, the bike felt good. Josh pressured us there for a while but in the end we pulled a bit of a gap,” said Stauffer.

“The second race was much the same, the times seemed a bit slower in the second race, myself included, but I was able to get a gap and be a lot more comfortable out there.

“It was a great weekend for us, we really needed to have at least a race win, so to get two wins, pole position and the round is what we needed. We can come out and try even harder up here with the V8 Supercars.”

An enthusiastic crowd was treated to an exemplary display of racing from the country’s best, with riders expertly negotiating the surface dips and bumps.

A two-time Australian Superbike Champion, Stauffer is elevated to second in the title hunt, 56 points shy of Allerton who remains in charge with a comfortable buffer.

The i-Style Natural Aprilia Team’s Ben Attard retains third in the points chase with a solid run this weekend.

The battle for Superbike honours resumes in August as Queensland Raceway hosts the second ‘2+4’ meet for the year featuring the ASBK alongside V8 Supercars.

Teammate Rick Olson finished third, bookending Brendan Clarke who returned to the track with a spirited ride on the Champion’s Ride Days Honda.

The trio traded positions with a number of slipstreams and late-braking moves, and it was Curtain who was in the lead as the chequered flag waved on both of the 17-lap races.

Championship leader and polesitter Mitchell Carr had a day to forget, with clutch problems ending his race early this morning and a crash at turn 3 resulting in a finish at the back of the pack.

Curtain leaves Queensland Raceway as the new points leader, with Carr dropping down the order to sixth.

Team Suzuki’s Brodie Waters’ consistent run elevates him to second in the championship, 21 points off the lead.

Christian Casella, Aaron Gobert and Rick Olson round out the top five after the penultimate round of racing, with the class next on track at Phillip Island in November.

Here is the video wrap of the day