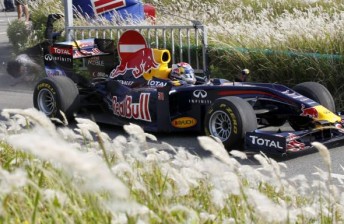 A man has been fortunate to walk away with next to no injuries after he was hit by SébastienBuemi in Red Bull’s demonstration Formula 1 car in Japan.

Making a visit to lift the spirits of those affected by the Japanese earth quake and tsunami, Buemi was making the demonstration run in Chiba.

Just as the Swiss driver was travelling through a Red Bull arch at less than 40 km/h, an event official crossed the track in the path of the F1 car.

On previous runs Buemi had accelerate after crossing underneath the arch and was only seconds away from repeating the exercise when the incident occurred.

“I am not allowed to comment on the accident before Red Bull has finished their investigations,” said.

Information from the event stated ‘The local organizer was injured only slightly’.

Here is the video of the incident