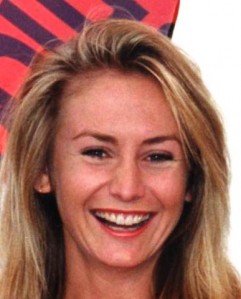 There is a lot more to racing than what happens on the track, sometimes the off track action is more interesting to the sport’s legions of fans.

In an era of being politically correct and not being sexist, it is perhaps surprising to some that promotional staff or grid girls are still as popular with race teams and corporate sponsors today as they were twenty years ago.

Sharon Phipps grew up on the Gold Coast and counts people like Mick Doohan as a close friend. In 1990 she was invited to attend the Australian 500cc Grand Prix at Phillip Island, she arrived as a guest and left as a fan.

Following that event Phipps started on the road to V8 Supercar immortality. Team management and drivers that were involved in V8 Supercars (in particular) between 1990 and 2007 know of the name Phipps, or Phippsy as she was better known, and have either hired her for work or gone through her agency in search of quality promotional staff.

“I can’t quite remember but I think it was the 500cc race at Phillip Island in 1990 where I made my motorsport debut,” Sharon Phipps explained to Speedcafe.com

“I came down to have a look at the event; I was good friends with Mick Doohan.

“I had a soft spot for motor bikes because I knew a few guys, like Mick, who rode, so I enjoyed watching them compete.

“I went down and got caught up in the atmosphere of that first grand prix and really fell in love with the sport from there, I really enjoyed it.”

It was almost immediately after this debut event that Phipps approached Shell for some work, which started a career that would go for over 17 years.

“I didn’t set out to be a promo girl,” said Phipps.

“I was living on the Gold Coast and got some work for Shell through an agency doing some work with the Power boat series.

“I then went to Geoff Hardwick at Shell and got the job travelling with the Australian Superbikes series.

“I met a lot of people, networked and with some initiative pushed my way in to the motorsport industry.” 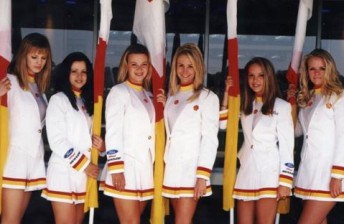 Phipps enjoyed the lifestyle and the constant change of workplace scenery that comes with the motorsport industry.

“What I enjoyed the most about the job was the variety,” said Phipps.

“It’s the different events; you’re not going to the same workplace every day. One day I could have been at a speed boat event, another day the bikes or the cars, or tradeshows or golf, the variation was terrific.

“I also did photographic work, some bikini jobs on the Gold Coast for brands like Cheetah and Hot Tuna, I also did fashion parades, that sort of thing.”

While Phipps was a well known and respected promo girl, the job eventually turned into something a lot more, so she started her own business, this being Sharon Phipps Promotions.

“I never planned on having a business where I was employing girls,” said Phipps.

“I planned to do enough to keep myself employed and busy, then everything else started to fall in place around me.

“I recognised that many teams and the sport wanted to deal with someone they trusted and someone that could deliver, so I started chasing other work.

“I ended up working with the 2-litre series and then V8 Supercars for 17 years.”

It’s fair to say that Phipps has stood on the podium a lot more than drivers like Mark Skaife and Craig Lowndes. Phipps organised the podium and was a part of the trophy presentations during the years that the global oil giant enjoyed naming rights over the sport.

“Working for Shell it was my job to organise the podium,” said Phipps.

“Event organisers would bring the trophies and I’d ensure everything was in place, like the promotional girls and the champagne.

“I’ve definitely spent a lot of time on the podium and had my fair share of champagne in the eyes.

“It was always fun on the podium because there was so much atmosphere.” 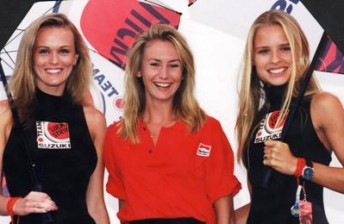 Phipps the business woman, with two of her staff

As Phipps’ business grew, she found herself supplying girls to some of the biggest teams down the V8 pit lane, teams like Dick Johnson Racing, Super Cheap Auto Racing, Holden Racing Team, K-Mart Racing, Shell, Ford and Holden to name a few.

“I had thousands of girls on my books,” said Phipps.

“I had business all over Australia so I needed to have girls in every state.

“At Bathurst one year I had over 70 girls working there.

“Because my business was national I also had 75 girls working for Tabcorp at the Spring Racing Carnival.

“At any one time I could have jobs all over the country.

“One year I had four series going, I had the Superbikes, the Power Boats, the 2-litre series and V8 Supercars, it was hectic.”

Crowds can be a rowdy bunch and there have been plenty of occasions when overzealous fans give promotional girls grief, but Phipps prided herself on looking after her staff at the track.

“I rarely had any problems,” said Phipps.

“The worst place was Bathurst, you could have trouble there from time to time if you were not careful, but I knew where to let the girls go and told them areas to avoid.

“I always made sure anyone employed by me was looked after.” Phipps had a big say in how promo staff were presented. On the podium for Shell Australia

As someone that was involved in the promotional staffing industry for such a long time, Phipps saw significant changes over her career.

“There have been some big changes in regard to how businesses want to be represented,” said Phipps.

“Now it is less about the skimpy uniforms and more about professional representation.

“Sponsors want their promotional staff to know and understand the company and /or the products that they sell.

“It’s changed a lot over the years, it changed significantly when AVESCO (Australian Vee Eight Supercar Company) was formed.

“They wanted to present the sport more professionally, which they’ve done.”

When Phipps started there was a tendency for some teams and sponsors to focus on skin, which is something she tried to steer them away from.

“I was always aware of having to put girls in tacky or skimpy outfits,” said Phipps.

“I didn’t like this myself so I always tried to talk my clients into having more up market, classy outfits.

“There were more corporate clients entering the sport and they had much higher expectations of the sport and how their promotional staff were perceived.”

For someone that was around the sport for so long Phipps witnessed a lot of big moments, the one that stands out the most was the Mark Larkham/Paul Morris accident at Oran Park in 1999. Phipps was on the grid wall and saw the incident right up close.

“The biggest buzz I had, and this sounds horrible, was the crash involving Mark Larkham at Oran Park,” said Phipps.

“It was amazing to watch that accident unfold, I saw the whole lot from the starting grid.

“I’d just come off the grid and I was standing beside the officials on the wall.

“I vividly remember the initial contact then the trail of fire as it made its way to Morris’ car.

“Morris was scrambling to get out of the car and the crews of both cars were rushing to help. They were very lucky.” 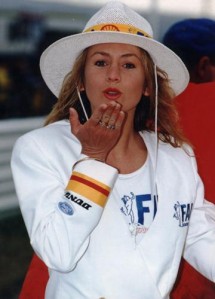 After 17 years Phipps decided she’d had enough of race tracks and the travel that went with it, and by the end of the 2007 season she’d sold her business and purchased some land in Melbourne’s Dandenong Ranges.

“I bought my place in 2007, I run a horse agistment property,” said Phipps.

“If people need someone to look after their horses they pay me to take care of them.

“We also offer horse spelling, which is basically horse retirement, so we get the odd race horse at the end of their racing career.

Since turning her back on motor racing Phipps admits she has not kept an eye on the sport, she’s far too busy.

“I don’t watch many races; it’s not a priority for me anymore,” said Phipps.

“I enjoyed life at the track, I was making good money and I enjoyed the people that were involved in the sport, it just got to the stage where I needed a change of scenery.

“I sold my business four or five years ago and I never was one to watch motorsport on television.

“I was always far too busy to know what was happening on the track, which really hasn’t changed for me.”