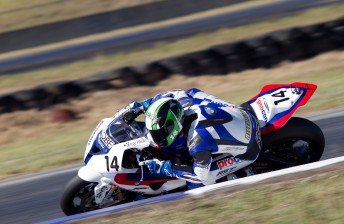 Championship leader Glenn Allerton described Queensland Raceway as a puzzle and he put the pieces together to set the quickest time in a pacey pair of practice sessions to head off round five of the QBE Australian Superbike Championship.

The runaway points leader didn’t have it all his own way, however, with The i-Style Natural Aprilia racer Ben Attard quickest at the conclusion of the morning session.

Attard only dropped a spot as the day came to a close, with Team Mack Truck Suzuki’s Robbie Bugden a solid third-fastest at his home track.

Team Honda’s Wayne Maxwell brought out a red-flag in the second 30-minute session of the day when he lost the rear end of his Fireblade coming out of turn 5, sending himself and the bike tumbling.

Maxwell was able to re-mount his second bike and continue, and is hopeful of a better run of luck tomorrow.

Round 5 sees the return of Josh Waters to the Team Suzuki fold, with the young star jetting in yesterday afternoon from the United States following his second World Superbike outing.

He was sixth-fastest today and will be one to watch as the factory Suzuki outfit look to extract more pace from their machines ahead of qualifying.

Kevin Curtain got the nod in a closely-contested pair of QBE Supersport practice sessions, the only rider to dip into the one-minute-twelve-second mark at the end of the day.

Local rider Brendan Clarke impressed in second place, with Rick Olson, Curtain’s teammate, third. Aaron Gobert made it four from four for Yamaha, with the R6 looking like the machine to beat in tomorrow’s qualifying.