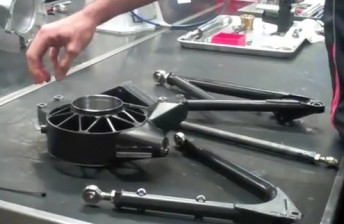 The key components of the front suspension of a V8 Supercar

Every second Thursday, Speedcafe.com will bring you a new technical video, with thanks to Triple Eight Race Engineering, Dick Johnson Racing and Ford Performance Racing.

The second episode in the Norton 360 Engineered for Speed Technical Section is the first of a two-part look at a V8 Supercar’s front-suspension.

In the below video, Craig Lowndes’ race engineer Jeromy Moore explains several key components of the front-supension – with a detailed look at springs and dampers to come in a separate episode.

Next Story Tekno opens its doors to public this Sunday