Kelly to sub for Ambrose in Montreal 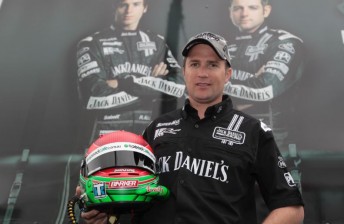 Kelly, who made his Nationwide Series race debut last year, has been called upon by his fellow Tasmanian due to a date clash that will see Ambrose busy with his Sprint Cup duties at Michigan.

Ambrose will fly to Canada in time for his one-off Nationwide Series race appearance, where he will attempt to notch up his first victory in a race he has largely dominated for the last three seasons.

Kelly says he’s looking forward to getting behind the wheel of the Richard Petty Motorsport Ford.

“It will be great to get back behind the wheel of a Nationwide car and get some laps in at Montreal,” said Kelly.

“I’m certainly happy to help Marcos out. We’ve been mates for a long time and like all Aussies I want to see him finally get a win at Montreal.

“My role will just be to get everything right for him in terms of the car set-up. When he rolls in off the jet I’ll just run him through where the car is at, what the track feels like and then he can take over.”

Kelly shone in his one-off Nationwide appearance at Watkins Glenn last year, and says he hopes to put a deal together to race either at Road America (June 25) or the Glenn (August 13) before the Montreal date (August 20).

“I’m actively looking to do the other Nationwide road course races at Road America and Watkins Glen,” confirmed Kelly.

“It would be great to get another crack at a race after getting fifth at Road America last year.

“There are a few balls in the air so we will have to wait and see what we can pull off, but it’s nice to have this opportunity and I’m keen to help Marcos get a win in Canada.” Next Story Ambrose: Montreal a big break for Kelly