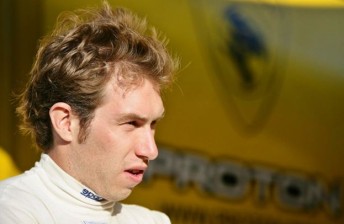 Australian rally star Chris Atkinson will have his first taste of V8 Supercar power tomorrow when he gets behind the wheel of a Paul Morris Motorsport Commodore.

The Queenslander currently competes with Proton in the Intercontinental Rally Challenge and Asia Pacific Rally Championship, and will test at Queensland Raceway alongside TeamVodafone, Jim Beam Racing and Stone Brothers Racing.

Atkinson, who is best known for completing four World Rally Championship seasons with the Subaru World Rally Team between 2005 and 2008, says he’s looking forward to the experience.

“I’ve always had a great urge to drive a V8 Supercar so tomorrow’s going to be a pretty cool experience for me,” said Atkinson.

“I’ve known Paul and Terry (Morris) for a long time now and thanks to Paul Morris Motorsports for giving me the opportunity to jump behind the wheel of what is one of most advanced touring cars in the world.

“I go riding a lot with JC (James Courtney) and Webby (Jonothan Webb) when I’m back in Australia and the boys have given me a few tips on handling the V8 around QR.”

Atkinson has tested several racing cars over the years, including a Carrera Cup car, a Radical sportscar, an Aston Martin GT3 and a MINI Challenge JCW, in addition to finishing second in the 2007 Bathurst 12 Hour event aboard a Subaru WRX production vehicle.

The 30-year-old says that these experiences should help him adapt to the V8 Supercar.

“I’ve finally got a ticket to greatest show on wheels and its going to be awesome!”

Atkinson is currently working on securing a World Rally Championship berth at Rally Australia later this year, as a precursor to a full-time return to the top level of the sport next year.