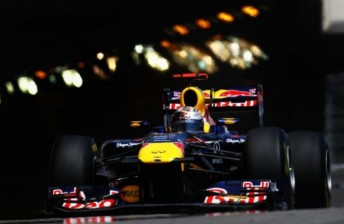 Sebastian Vettel hung on for a memorable Grand Prix victory

Sebastian Vettel has taken his fifth win of the season after a red flag punctuated Monaco Grand Prix.

The race was halted with six laps remaining after a heavy crash at the Louis Chiron chicane involving Vitaly Petrov’s Renault.

Fernando Alonso and Jenson Button filled the podium after pressuring Vettel prior to the race-pausing incident.

The two World Champions were unable to make an impression on Vettel in the final laps due to the entire field being able to take on new tyres during the stoppage.

Mark Webber took fourth after a brilliant pass on Kamui Kobayashi into the Nouvelle Chicane on the penultimate lap.

The early stages of the race saw Vettel pull a comfortable five second margin over fellow front-row starter Button, before the latter pitted for a second set of Super Soft tyres on Lap 16.

Red Bull reacted to McLaren’s pitwork by stopping Vettel one lap later – with the German returning to the track on the Soft tyres six seconds behind Button after a considerable delay.

Alonso, who had passed Webber for third into the first corner, made his first stop on Lap 18 and rejoined in third, while Webber stopped immediately after Vettel and suffered an even lengthier delay to rejoin 12th.

Button extended his lead over Vettel to 14s in the second stint, before returning to the pits on Lap 33 for a third set of Super Softs.

The expected second round of stops was immediately scrambled by a Safety Car period – caused by a scrap between Hamilton and Felipe Massa ending with the Ferrari driver making heavy contact with the outside wall in the Tunnel.

Vettel elected not to pit and continued in the lead, while Alonso came in for a set of Soft tyres to slot back in behind Button.

When the race restarted on Lap 38, Button found himself unable to move around Vettel. The McLaren driver still had to pit for the Soft tyres, and did so on Lap 48.

With Red Bull not reacting to Button’s stop, it became clear that the German was attempting to complete the final 62 laps on the same set of tyres.

By the time the red flag appeared on Lap 72, Vettel, Alonso and Button had been running nose to tail – with the grandstand finished ruined by the stoppage neutralising the tyre strategies.

Pastor Maldonado was the hard luck story of the day, crashing out of sixth position on the restart after a daring move from Hamilton that saw considerable contact between the pair.

The McLaren driver had a fraught day which included an intense battle with Michael Schumacher over the opening ten laps, a slow first pitstop, a drive-through penalty for his incident with Massa, and sustaining heavy rear-wing damage in the red flag inducing crash.

Caused by Adrian Sutil slowing with a punctured tyre, the incident saw Jaime Alguersuari ride over the back of Hamilton’s McLaren, while the closely following Petrov followed the Toro Rosso into the outside wall. Petrov was reportedly knocked out in the incident before quickly coming to.

It was a tough day for the Mercedes team, with both drivers struggling with tyre life from the outset. Schumacher retired after his car stopped with suspected overheating issues during the Lap 34 Safety Car, while Rosberg took the chequered flag 11th – two laps down on Vettel.

Vettel now holds a 58 point lead over Hamilton after six races, while Webber is a further six points back in third.