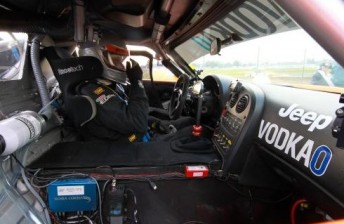 Greg Crick in his Jeep-backed Viper

Greg Crick stormed from the back of the grid to win the opening race of Round 3 of the Vodka O Australian GT Championship at Eastern Creek.

The top three qualifiers – Kevin Weeks, Crick and David Wall – all elected to start from the rear of the field after controversy erupted over the category’s handling of its ‘benchmark lap time’ regulations.

Having gone under the benchmark in qualifying, the three drivers escaped a 50kg weight penalty due to the championship’s organisers lowering the specified time after the session had taken place.

With a number of competitors expressing their discontent over the amendment, an urgent category meeting was called to rectify the situation – delaying the start of the race.

Once the 60 minute affair finally got underway, Crick quickly set about making his way through the field, with the Jeep-backed Dodge Viper ending the opening lap in ninth position.

The former series champion made his compulsory pitstop on Lap 15, and eventually took the lead 10 laps later when points leader Klark Quinn headed to the lane.

Crick then held off reigning champion David Wall (Michelin Porsche Cup S) to win by less than two seconds, while Peter Hackett was just 0.3s further back in third, marking a fine debut for his Mercedes SLS GT3.