Lowndes out for the weekend after quali crash

Lowndes out for the weekend after quali crash 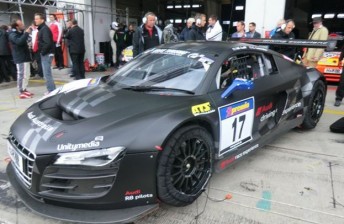 The #17 Audi sustained significant damage in the crash

Craig Lowndes and Warren Luff will not start this weekend’s VLN Series race at the Nurburgring after a qualifying crash.

The V8 Supercars drivers had flown to Germany to compete in the race in a Audi Race Experienced-prepared R8 LMS GT3.

Lowndes, who was hoping to use the race in order to qualifying for next year’s Nurburgring 24 Hour, was at the wheel of the R8 at the time of the crash and escaped unhurt from the incident.

“After qualifying 10th for the race – second of the Audi team on lower spec tyres – Craig was going for a quicker time when a slower car hit him in the rear wheel and turned him into the wall,” wrote Luff.

“We are out of the event now but completely satisfied with the experience. We have certainly raised some eyebrows over here.

“Hopefully we’ll get another invite to get over here soon and show them what we can really do!”