Latvala heads the field in Argentina

Latvala heads the field in Argentina 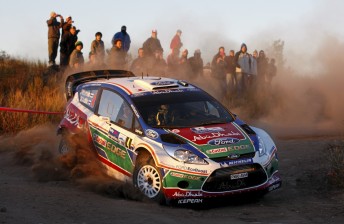 Finland’s Jari-Matti Latvala will begin Leg 2 of Rally Argentina with a lead of 18.2-seconds in his Ford Fiesta RS WRC following Friday’s six testing stages in the punishing Traslasierra Mountains of the country’s Cordoba region.

Apart from a minor stall on stage seven, the 26-year-old has driven impeccably all day, recording a total of four fastest stage times as he chases his first win of 2011 in front of tens of thousands of passionate rally fans.

“I’m pleased with my performance and I enjoyed the tarmac sections.

“Being first car on the road is a good position for tomorrow and I feel really confident I can keep this lead.”

The highlight of Latvala’s day occurred on the first run through the mixed-surface El Condor stage, which concluded with a 20-kilometre all-asphalt stretch. Latvala was 9.3s faster than his closest rival, Petter Solberg, and recorded an average speed of 196.2kph over the final 5.94-kilometres of the test.

Solberg will start day two in a strong second place in his privateer Citroen DS3 WRC.

“It’s been a very good day and I’ve only lost out on Tarmac where I have done no testing,” said Solberg.

Seven-time world champion Sebastien Loeb’s hopes of landing his sixth win in Argentina hang in the balance after the Frenchman was handed a one-minute time penalty following an early check-in prior to the midday regroup in Villa Carlos Paz. Despite rounding out Friday’s stages with the fastest time through the final test, the Citroen driver is 1m30.3s off the pace overnight.

“The gap is too big for tomorrow in this situation,” said Loeb.

“It’s not been a good day. But it was not a tactic, [it was] a mistake for the penalty. There were a lot of people at the checkpoint and people in front of the red [board]. I didn’t see it; I went too far, maybe 10 metres.”

Kiwi star Hayden Paddon finished the day in 10th overall and the leader in the Production Class section.