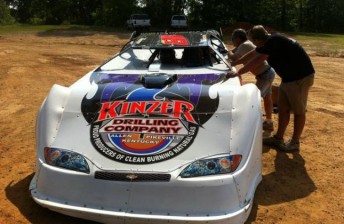 Ambrose will return to Eldora for a third consecutive year

Marcos Ambrose will return to Eldora Speedway for his third consecutive Prelude to the Dream in two weeks time.

The dirt track charity event, organised by circuit owner Tony Stewart, will be run on June 8, with 28 drivers in the field.

Ambrose finished 15th in last year’s event, and has tested his 2011 ride at Chattanooga, Tennessee.

Ambrose said he was impressed by his driver’s performance, after the former V8 Utes driver led 40 of the 67 laps, only to be passed for the win on the final tour by former Champ Car driver Andrew Ranger.

“The form that George has shown in Late Model competition and now in ARCA will definitely get people talking,” said Ambrose.