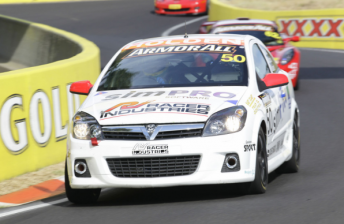 Jason Bright will compete in the opening round of the Australian Production Car Endurance Championship at Phillip Island this weekend.

The Perth and Winton V8 Supercars race winner will drive in the six hour race alongside Ryan McLeod in the Class C HSV VX-R.

The meeting doubles as the second round of the Australian Manufacturers Championship.

Bright is a late call-up to McLeod’s squad, and McLeod says that the combination should be strong enough to contend for outright victory against the might of the Mitsubishi Evos.

“I think we’ve got an outright chance, especially with the fuel and tyre strategy,” McLeod told Speedcafe.com.

“I thought it was a good idea to get Brighty. We thought it would be good to get someone to raise the profile of the event, and he was happy to do it.”

McLeod says that tyre life will be the key to this weekend’s race.

“There’s probably four of us in with a shot for the win, but it will depend on tyre life and weather,” he said.

“Over the distance with tyre wear and better fuel economy, I think we’ll be alright.”

McLeod’s HSV VR-X will compete with a special livery, featuring a ‘QR Code’ on the side of his entry. Those with a QR Code reader on their phone will be able to take a photo of the car which will direct you to a website where you’ll get free Race Industries product.

McLeod is also using the race meeting as a warm-up to the two overseas 24 Hour endurance races he wants to compete in. McLeod is committed to entering back-to-back 24 Hour races at Catalunya and Silverstone – just one week apart.

“We’re going back overseas with the cars, and we’re going to try and do the double header – Spain and Silverstone,” he said.

CLICK HERE for Speedcafe.com’s past story on McLeod’s overseas ambitions.

The Phillip island six-hour kicks off this Saturday.

CLICK HERE for Speedcafe.com’s previous story on this weekend’s event.