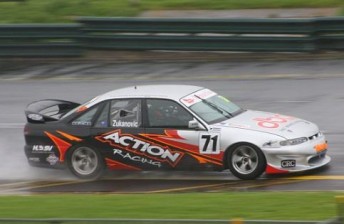 The 30-year-old has competed in the category’s opening two rounds at Wakefield Park and Bathurst, finishing second on each occasion.

“We’ve only got seven and there’s some fair breaks between them – so the Commodore Cup just fills it in nicely.

“To top it off we’ve had a good start with two second places, one at Wakefield at one at Bathurst.

“That’s got us into the championship lead, so we’ll continue on and see if we can’t win a title while I continue my Fujitsu Series campaign.”

Zukanovic will once again team up with his V8 Supercar mechanic Gerard McLeod at the upcoming Winton Endurance Challenge.

The Midway Commodore failed to start either race in Adelaide after a mechanical issue in qualifying, before finishing 11th overall at Barbagallo.

Zukanovic’s previous mount, an ex-Walkinshaw Performance VZ Commodore (HRT051), is currently for sale, but may appear in Zukanovic’s hands in the Kumho V8 Touring Car Series later in the season.