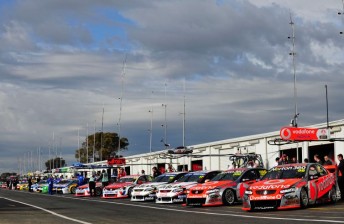 Yesterday, South Australian viewers were forced to wait until 11:30pm to watch Race 11 of the championship from Winton, after Network Seven’s request to switch the coverage to its 7mate channel was denied.

Under the proposed new legislation, originally intended to be introduced on January 1 of this year, all V8 Supercars events bar the Bathurst 1000 could be shown on a digital-only channel, such as 7mate, without also being broadcast on the network’s main channel.

As debate over the details of the new laws have delayed their introduction, several high-profile exemptions to the current laws have been awarded in recent times, which allowed Network Ten to broadcast last year’s Commonwealth Games on One HD, and for SBS to show selected World Cup football matches on SBS2.

Having already committed to showing two Australian Football League games in South Australia yesterday afternoon, a Seven spokesman told Speedcafe.com that the network was disappointed that it was left with no choice but to delay the V8 Supercars broadcast.

“We had planned to schedule the coverage from Winton on 7mate in Adelaide only to overcome a clash with AFL coverage involving an Adelaide Crows match, and sought approval for this from the Office of the Minister for Communications – given both sports are on the Government’s anti-siphoning list,” explained the spokesman.

“Unfortunately, our request to the Minister’s Department for the ‘de-listing’ of V8 Supercars from the anti-siphoning list that would have allowed a broadcast of V8s in Adelaide on 7mate was declined last week.

While initially supportive of plans to utilise 7mate for V8 Supercars when the new laws were first proposed last year (CLICK HERE for previous story), V8 Supercars chairman Tony Cochrane has become frustrated by the delays.