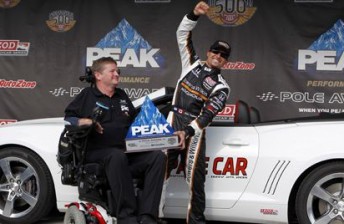 Sam Schmidt Motorsport driver Alex Tagliani will start the 100th anniversary Indianapolis 500 from pole position after a dramatic Pole Day at the speedway.

Tagliani’s four-lap average of 227.472mph was enough to beat the more fancied contenders, including those from Target Chip Ganassi Racing, whose two cars both ran out of fuel during their runs.

Scott Dixon still recorded the second fastest speed despite losing fuel pressure in the final corner, while team-mate Dario Franchitti was not so fortunate – the Scot unable to even complete his run.

Oriol Servia will start on the outside of the front-row for Newman/Haas Racing, while Tagliani’s team-mate Townsend Bell beat Australia’s Will Power (Team Penske) to fourth.

Despite a large practice crash, Simona de Silvestro (HVM) was the last driver to lock themselves into the race in 24th position – with the remaining 15 cars set to battle it out for the final nine grid positions on Bump Day.