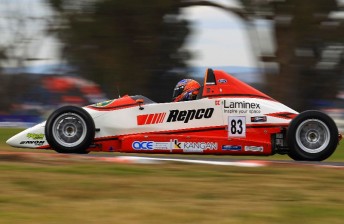 Matt Brabham took the round win at Winton

Matt Brabham has dominated a wet and wild final race at Winton Motor Raceway to take out Round 2 of  the 2011 Australian Formula Ford Championship.

The Sonic Mygale driver took Race 3 by an astonishing 10 seconds to record his second race victory in as many days.

Brabham, who is not completing the full season this year in order to focus on his Year 12 studies, was lucky to finish fifth in Race 2, after contact with team-mate Garry Jacobson at Turn 1 saw the third-generation racer spin into the infield.

“It is just a fantastic result, I’m absolutely over the moon and couldn’t be happier to secure my first round victory,” said Brabham.

“I felt really confident heading into the final race of the weekend because I’ve done a lot of running in the wet recently and I’ve always been very quick, so I knew I had a great chance to grab another race win.

“I made a great start and focused on consolidating my position once I made it to the front. It was really slippery, especially with the V8 rubber, so it was just a matter of keeping it on the black stuff and bringing it home.”

Fellow Sonic driver Cameron Waters took the championship lead by scoring second for the round after taking out Race 2 this morning.

“It’s been a good weekend from my perspective, and I’ve come away with the championship lead which is a nice bonus,” said Waters.

“Things didn’t start how I would have liked on Saturday, but I fought back and secured some good points which was enough for second in the round. It would have been nice to be on the top step of the podium, but if I can keep winning races then I’m sure the first round win is just around the corner.”

Minda Motorsport driver LeBrocq was third after taking advantage of the wet conditions late in the day. The Rising Star got stronger as the weekend wore on to score his first podium result.

Local driver Garry Jacobson was fourth for the round ahead of Liam Sager and Nick Foster, who experienced a high speed off in the final race of the weekend, but managed to rejoin unscathed. Trent Harrison was seventh, while Shae Davies, Tom Williamson and Mathew Hart rounded out the top 10.

The Australian Formula Ford Championship now takes a break before heading to Eastern Creek Raceway with the Shannons Nationals on July 15-17.