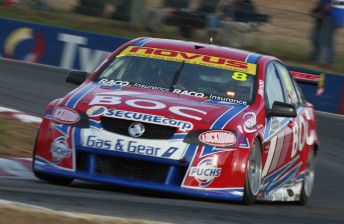 While the rain did not arrive until after the race, Bright stormed through the field in the final ten laps – taking the lead from Jamie Whincup with just four remaining.

Starting from eighth on the grid, Bright played the long game on strategy, not making his first stop until Lap 25 (four laps after Whincup), before stopping for the final time with just 20 laps to run.

While Whincup, Garth Tander and Michael Caruso dominated the majority of the race, Bright’s strategy meant that the Team BOC Holden passed all three of his rivals in the final five laps.

Whincup and Tander held on for second and third respectively, after shadowing each other throughout the 67 lap event, while Shane van Gisbergen, Fabian Coulthard, Caruso, Craig Lowndes, Steven Johnson, James Moffat and Steve Owen rounded out the top 10.

Pole-sitter Mark Winterbottom led the early laps, before Whincup and Tander made it past the factory Ford driver on Laps 12 and 13 respectively.

Lee Holdsworth and Caruso played the ‘under-cut’ strategy throughout the day, pitting earlier than their rivals in order to gain track position.

Tander was the fastest man on track in the second stint, moving past the Fujitsu entries on Laps 25 and 26, before eventually taking Whincup on Lap 31.

TeamVodafone turned the tables however when the pair pitted together 14 laps later, with Tander rejoining behind Whincup and the ever present Caruso.

Caruso’s strategy hurt in the closing laps, allowing van Gisbergen and Coulthard to move by – with the Bundaberg Holden snatching fifth place at the finish line.

Fortunes were even worse for fellow FPR pilot Will Davison, whose race was effectively over on the third lap when he spun in the mid-pack at Turn 7.

The incident caused the race’s one and only Safety Car, and saw the cars of Todd Kelly, Russell Ingall and James Courtney also suffer significant damage.