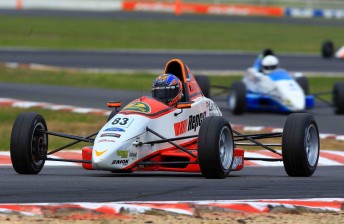 The grandson of Sir Jack Brabham dominated the first race of the weekend from pole position to lead home a Team Sonic whitewash with Garry Jacobson and Cameron Waters second and third respectively.

“I was really happy to take pole position this morning and to lead the race from start to finish was very pleasing,” Brabham said.

“It’s my first national series round this year and my first race was a victory, which is exciting, but I’m focused on finishing on a strong note tomorrow as well.

“To be honest it’s probably a little bit of a surprise to come away with the win in my first weekend back and I really need to thank Team Sonic for helping me get the best from the car.”

Brabham missed the first round of the championship at the Clipsal 500 as he is concentrating on his Year 12 studies. He will contest selected national rounds this year while doing all of the rounds of the Victorian state series.

Third place went to Waters ahead of Nick Foster. The result meant that the top four cars were from the crack Sonic team.

The second and third races of the Formula Ford round at Winton will be held tomorrow.