Lowndes the class of the field in qualifying

Lowndes the class of the field in qualifying 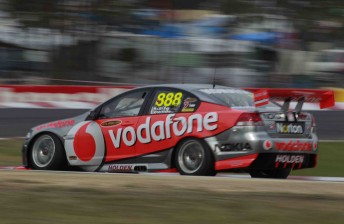 TeamVodafone’s Craig Lowndes has proven the class of the field in V8 Supercars qualifying at Winton – setting the fastest two times of the 20 minute session.

Steven Johnson (Jim Beam Racing) will share the front-row with the Triple Eight Commodore, having vaulted up the order with a last-gasp effort after the chequered flag fell.

Jame Whincup improved his best time on his last run but could do no better than third, while Lee Holdsworth (Fujitsu Racing) and Paul Dumbrell (The Bottle-O Racing) rounded out the top five.

David Reynolds (Stratco Racing) continued on from his strong practice form with the sixth fastest time – just 0.25s off pole.