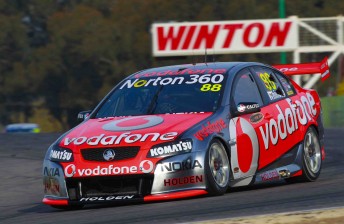 The DJR Falcon had led the entire opening stanza of the race, but dropped behind Whincup despite pitting just one lap after his Holden rival.

Holdsworth and Johnson tracked Whincup to the flag to take second and third respectively, while Rick Kelly and Paul Dumbrell rounded out the top five.

The final order was determined largely by the timing of the pitstops, with the tyre changes spread out between Laps 14 and 23 as the teams traded off early track position for late-race speed.

Alex Davison took sixth after coming out on top in some intense racing late in the going, while Jason Bright, who did not pit until Lap 20, climbed through to seventh.

Having started 19th on the grid, James Courtney was the ultimate gambler, staying on the track until Lap 23, before charging from 19th to eighth over the final 18 laps.

Mark Winterbottom and Fabian Coulthard rounded out the top 10, while Lowndes could manage only 11th after falling off the road at Turn 11 while running sixth in the closing stages..

Garth Tander initially benefited from pitting with Whincup on Lap 14, with the Toll HRT Commodore jumping from outside the top ten to run fifth by the completion of the pitstops.

Tander fell to 12th as his tyres faded in the closing laps however, leaving the 2007 champion to lead home Stone Brothers Racing’s Shane van Gisbergen and Tim Slade.

Michael Caruso and David Reynolds were the hard luck stories of the race, with the Fujitsu Racing entry coming home 16th after being turned around by Coulthard at Turn 3 on Lap 17, and Reynolds making an early trip to the pits to repair a rear bumper damaged in the opening lap action.

The race’s only Safety Car was called for a separate incident on Lap 1, after a multi-car tangle at Turn 1 left Jason Bargwanna’s Jana Living entry stranded on the circuit.

Tony D’Alberto, Todd Kelly and Shane van Gisbergen were also involved in the incident – with all three cars forced immediately to the pits.

Warren Luff was also an early casualty, with the Gulf Western Oil Commodore stopping on Lap 2 with electrical issues.