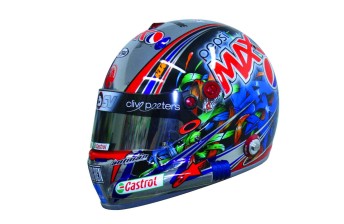 The Kiwi hero has taken the wraps off his new Pepsi Max design, featuring the graffiti artwork that was displayed on the first version of his Kelly Racing-prepared V8 Supercar.

Murphy started the year with a largely plain black helmet after his Monster Energy deal from 2010 was dissolved after he struck the deal to drive the Pepsi Max entry.

It has taken Antman Helmet Design’s artist Ant Wolski a number of months to piece together Murph’s new look, but he says the wait has been worth it.

“The design was from Pepsi. We used the graffiti style from the first car,” Ant told Speedcafe.com.

“We put together the design and obviously tried to incorporate Murph’s own look as well.

“It was quite an epic piece. It’s all chrome based, so it was quite difficult, but I’m pretty proud of it. I hope it was worth the wait.

“His first helmet was supposed to be this one, but there were a few issues with the design, so it took us some time to get the new one right.”

Murphy will use the new colours for the first time this weekend at Winton Motor Raceway.