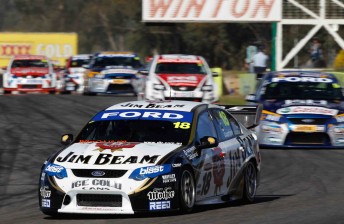 Lindsell, from Melbourne, has won himself and his partner an all-expenses paid corporate experience for the fifth event of the V8 Supercars Championship at the central Victorian track.

Like more than 2000 other entrants, Lindell entered his details on Speedcafe.com and has been lucky enough to secure the prize.

He says that he is pleased to have won the passes for Sunday, considering the weather forecast …

“It looks like it might rain on Sunday, so it will be good with a bit of cover over my head,” he said.

Lindsell is a Garry Rogers Motorsport and Lee Holdsworth fan. He is hoping to see the Fujitsu entries up the front at their home track.

“I support GRM. They’re a good team – I think Mr Bling-fest (Garry Rogers) is a character!” he said.

“I hope Lee wins. As a supporter, I’ve gotta back him, but i think it will be tough for them this weekend.”

Lindsell says that he loves the Speedcafe.com site and uses it regularly to ‘get his racing fix.’

“I think it’s a good site. It offers you an insight on the stuff that’s going on in the background that you might not know about,” he said.

Supporting the V8 Supercars this weekend will be the Australian Formula Ford Championship, Formula 3, Australian GT and the Aussie Racing Cars.

Stay tuned to Speedcafe.com for more cool prizes in the coming weeks …