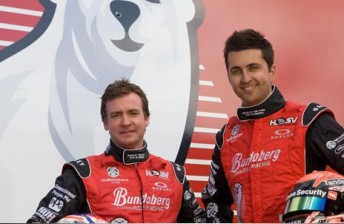 Coulthard and Baird had a troubled endurance campaign together last year

Versatile Kiwi Craig Baird has been confirmed as Fabian Coulthard’s co-driver for this year’s L&H 500 and Supercheap Auto Bathurst 1000.

The pair will aim to make amends for their disastrous 2010 campaign together, which saw Coulthard crash out of Bathurst in spectacular fashion on the opening lap.

Baird, who currently sits second in the 2011 Carrera Cup Australia Championship, will line-up in a Walkinshaw Commodore for the fifth consecutive year – having had his first run with the squad alongside Garth Tander at the 2007 Sandown 500.

According to Baird, experience will be the #61 Bundaberg-backed entry’s greatest asset.

“Fabian is very relaxed and from a co-drivers point of view, he doesn’t put a huge amount of pressure on, he just lets you get on and do your job,” said Baird of his lead driver.

“Experience pays when you head to a place like Bathurst and there are always a number of obstacles that can be thrown at you, but to have two experienced drivers pays off at Mount Panorama and I think we have seen that in the past.”

Despite the disastrous ending, Coulthard said that he and Baird worked well together last year.

“Craig and I were fortunate enough last year in that we both had the same feedback about the car,” said Coulthard.

“We look for similar things car setup wise. Our driving positions are relatively close and we both like to get in and drive so I think we are a great match-up.

“Craig has great credentials and he has won a lot of races in a variety of different categories and I know that I can hand the car over to him and have confidence in his speed and driving ability.”

Coulthard currently sits 11th in the 2011 V8 Supercars Championship points standings, having run as high as fifth following the Clipsal 500.

After missing the team’s Winton test day last week, Baird will get behind the wheel of the Bundaberg Commodore tomorrow during the practice sessions allocated to endurance co-drivers.