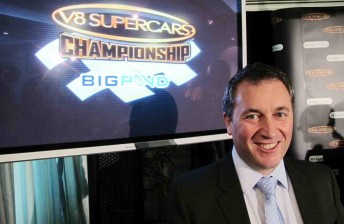 After nine months of deliberation and negotiation, V8 Supercars has a new majority owner, and there’s one man above all others who can be thanked for it.

Tim Miles and his Miles Advisory Partners company acted as corporate advisors to the V8 Supercars teams and SEL during the sale process, eventually netting a sale in excess of $300 million to Archer Capital.

Miles, a former V8 Supercars team owner with Tasman Motorsport, knows the inner world of the V8 Supercars business better than anyone now, and Speedcafe.com’s Grant Rowley caught up with him after the announcement yesterday.

SPEEDCAFE: Simply, is it nice to have the sale finalised and out of your life?

TIM MILES: Yeah, it is. It has been a process that I’ve throughly enjoyed, being back associated with the sport again. It’s good to get it wrapped up. It is something that you could see how much value is going to be provided to the sport if we got it right. It is quite rewarding to get it to this point, knowing that we’ve put together a better structure for all of the stakeholders in the category.

SPEEDCAFE: This is the start of the next phase in V8 Supercars, but it might not be a long one. Private equity companies traditionally don’t hang around for a long time. What’s happens from here?

MILES: That’s right, they all have an investment in their eyes which can be as short as three years, or as long as seven. If you look in the middle of that and think of it as a five year horizon, then certainly there’ll be another ownership transaction in the future.

The point between now and then is really where the value will be added. The sport has grown. In 14 years, we’ve seen it start at turning over less than $1 million to having more than $130 million turnover, and it has just run full steam ahead at that growth.

It is almost at an infliction point. It’s been grown so fast that it needed some governance around building a better platform to give the business the ability to grow for the next period.

I think that’s where the private equity guys, particularly Archer, have got such a good track record of buying businesses that have a phenomenal growth record and helping them while giving themselves a better platform. I reckon of all the business I’ve seen, V8s will benefit from it the most.

SPEEDCAFE: Archer has purchased its 60 percent of the business for in excess of $300 million. There was chat that if a private equity firm took hold, it would want to see its value in the sport be worth $600 million before it sells. Is that possible?

MILES: I don’t think Archer has ever talked about that. I’ve heard that going around. I’m not sure where that came from, but it’s a beautiful number!

I think it has all the ingredients to double, without a doubt.

SPEEDCAFE: Part of the new deal is a new board of directors structure. You’ve been involved as a V8 team owner in the past. Is this the right move?

Now, what you’ll see with the commission, will be much more operationally focused, while the board will be more governance and strategy focused. That change won’t happen overnight. It will take a while for everyone to settle into the new regime, but I think it will make a phenonemal difference.

On the other hand, the commercial rules, the sporting rules and the technical rules are about day-to-day operations and the two things needed to be separated.

MILES: The final two were incredibly close. The strategic value offered by both of them and the financial position of both of them was incredibly similar. The teams and SEL, but the teams mainly, were spoiled for choice. Both partners put in very strong bids.

SPEEDCAFE: So what was the deciding factor?

MILES: There were a heap of things. The teams couldn’t have been in a better position to tell you, but in my opinion, one of the things was that the teams identified that just chasing growth wasn’t the only area where the business would drive benefit. It would also drive benefit from a restructure that would give it the governance that I spoke about. And also having a board presence that was very hands-on on assisting the business in its growth.

I think the general consensus is that both bidders would give that, but maybe Archer would give it slightly more.

The other bidder probably had better opportunities for long-term growth, but the conclusion was that there was no reason why they couldn’t find a way to do that with that party in the future anyway. Whether it was by just engaging with them to assist with the growth, a joint venture, or even the people who buy it off Archer in the future.

The conclusion was that going with Archer didn’t prevent you from having a relationship with the other party.

The big thing from a teams perspective, Archer is in this to turn it around somewhere in a five-year horizon. There’s no reason why teams might not take a little bit more capital off the table in the Archer exit as well. And because they have a firm time horizon, they’ll be working more towards the short/mid-term goals, but I think there’s a general consensus that there’s a lot about the business that can be improved, here and now.

SPEEDCAFE: So what do you do from here with the sale? The process ends at the end of this month?

MILES: Hopefully it will be wrapped up by the end of this month. We’ve got a few little tidying up issues to resolve between now and the end of the month. Hopefully we go sailing through all of those things.

At the end of the month, we get to the completion stage where Archer’s investment is cemented and I sit back and watch it on television.

SPEEDCAFE: Each V8 Supercars Racing Entitlements Contract owner is now around $4 million wealthier. You were a part owner just a few years ago. Do you wish you still had a piece of the pie?

MILES: I certainly wondered about the timing of my exit a few times during the process!

SPEEDCAFE: Do you miss it? Do you wish you were still part of it?

MILES: I certainly don’t miss the way we were doing it. We didn’t do a very good job of it at Tasman. It’s a business that you can’t be part-time on, and obviously I have another business that I run, so I was never able to give Tasman the focus I would have liked.

When you can’t give something the focus it needs, you’re not going to succeed.

If we were going to do it again, you’d only do it full-time, you wouldn’t attempt to do it part-time.