The 22-year-old New Zealander will compete with backing from the popular energy drink brand, sporting a new helmet design (pictured).

Van Gisbergen will debut his new helmet design at Hidden Valley’s V8 Supercars event as the Antman design will not be ready in time for this weekend’s Winton event.

“I’ve had my eye on Shane for some time now as he has shown great talent rising up through the pack and becoming one of the rising stars of V8 racing game in NZ and Australia. 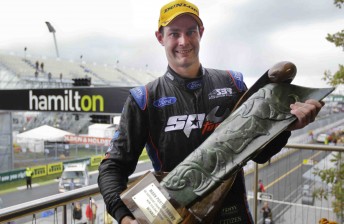 “We all dreamed about being pro athletes, musicians and living the life. We know it takes encouragement and support to make that dream a reality, so we have great delight in getting onboard with Shane to help him realise his life time dreams.

“We look forward to working with Shane and the Stone Brothers Racing Team to jump onto a few more podium’s in the near future, and having a bit of fun as we go along.”

Greg Murphy was supported by Monster last season, but his 2011 deal with the Pepsi Max Crew ruled him out of the deal.

Monster has upped its backing of Sera this weekend, supporting his circuit racing debut in the Aussie Racing Cars class. CLICK HERE for Speedcafe.com’s news story.