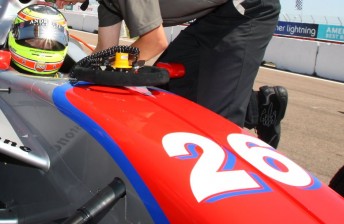 Winslow in his Indy Lights entry

Briton James Winslow has confirmed that he’ll return to the Formula 3 Australian Drivers’ Championship for the opening round at Winton Motor Raceway this weekend.

Winslow, who won the 2008 Australian F3 title, will fly in from Indianapolis Motor Speedway – where he has been practicing for the forthcoming Freedom 100 Firestone Indy Lights series race – for the Winton event.

Winslow will drive a Mercedes-powered Dallara F307 for R-Tek Motorsport, and says he’s hoping to add a second Gold Star to his collection, while also contesting a full Indy Lights Series program with Andretti Autosports in the United States.

“The F3 Australian Drivers Championship has great cars and is a great series. I’d love to win another Gold Star,” said Winslow.

“I left Australia to chase the IndyCar dream in the USA at a time when I had testing planned with Triple Eight and drives lined up with good V8 teams, so I’m keen to pick up where I left off.

“With the F3 series joining the V8 package for selected rounds this year it makes the series an even better place to show yourself.

“I’m hoping that this F3 deal will turn into a full season and potentially another Gold Star winning effort. If we can find some more support to go on with it then it could be another great season.”

The Indianapolis event, scheduled for May 27, will mark Winslow’s first oval-track race.