Podium for Ambrose on the ‘Monster Mile’

Podium for Ambrose on the ‘Monster Mile’ 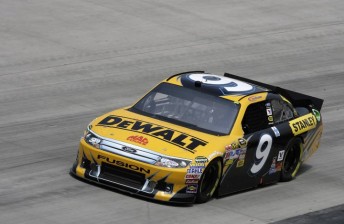 Australia’s Marcos Ambrose has scored his best result of the NASCAR Sprint Cup Series so far in 2011 with third place in the FedEx 400 at Dover International Speedway.

The race was won by Matt Kenseth, who like Ambrose, used a two-tyre call late and held-on from the re-start of on Lap 367 all the way to the finish on Lap 400 from Mark Martin just 0.2-of-a-asecond ahead of Ambrose.

The top-5 was rounded out by Kyle Busch and Brian Vickers.

Ambrose ran strongly throughout the event, quickly moving up from his 18th starting position. Good driving was complemented by execellent work in the pits and was a threat throughout the entire race as he climbed to as high as second and even challenged for the lead on a number of occasions on a track that he rates as a favourite.

“We had a really good day at Darlington but it didn’t work out at the end. We had some terrible luck.

“We have had two top-10s on the 1.5 mile speedways this year and I am really excited that our team is learning. They are learning me and I am learning them. I am learning how these cars work.

The result moves the Tasmanian up to two places in the championship chase to 20th, just 30 points out of the all-important 12th position.

The NASCAR Sprint Cup Series has a weekend off from points paying competition to concentrate on the Sprint All-Star Race, which will be held at Charlotte Motor Speedway next Saturday night.

Marcos Ambrose’s next big challenge is to gain a starting spot in the Sprint All-Star Race, which is scheduled for the 21st of May at Charlotte Motor Speedway.

Ambrose can gain a start in the race by either finishing in the top-two in the qualifying Sprint Shootout race, or by winning the popular fan vote www.nascar.com/promos/allstar/2011/vote/

Current ratings have Ambrose inside the top-ten contenders, as fans are allowed to vote once an hour until polling closes.

Championship after Race 11 of 36