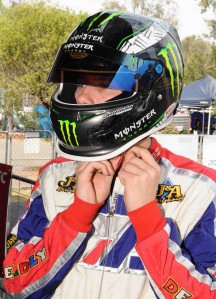 Leading kart racer David Sera will make his circuit racing debut aboard an Aussie Racing Car at the Winton Motor Racing this weekend.

Sera, who has won 11 Australian karting championships, will compete aboard a Monster Energy-backed entry in the pint-sized racing category.

At this stage, Winton is the only event locked in for Sera aboard an Aussie Racing Car, however, he is aiming to expand his racing program to incorporate all of the remaining rounds of the series.

“I’m very excited to be making my circuit racing debut this weekend,” said Sera, who has enjoyed backing from Monster Energy since last year.

“From all reports, the Aussie Racing Car is similar to a gearbox kart but with a body shell on top so hopefully it won’t be too big of a step for me.

“I won’t actually sit in the car until Friday morning so my main aim will be to be as competitive as I can be and if I can continually improve across the weekend I’ll be pleased.”

Over the past 12 months Sera has been almost unstoppable on karting circuits across the world having enjoyed enormous success in major events – including the Florida Winter Tour and the CIK Stars of Karting Series presented by Castrol EDGE.

Sera will take to the circuit for the first time aboard the Monster Energy-backed Aussie Racing Car for practice at 10:10am on Friday followed by qualifying at 12:20pm.

He will then contest a further qualifying session on Saturday morning (10:30am) ahead of two races on both Saturday and Sunday.

The Aussie Racing Cars are supporting the V8 Supercars at the Winton this weekend.