Crump in race against time after dislocation

Crump in race against time after dislocation 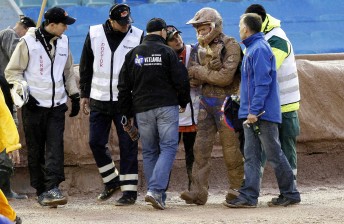 Jason Crump after his high speed get off in Sweden

Jason Crump has revealed he dislocated his shoulder in his crash at the Swedish Speedway Grand Prix in Gothenburg – and is in a race against time to be fit for the next event on May 28.

Crump went hard into the airfence during heat 10 of the encounter – which was abandoned after heat 16 due to the inclement weather.

He knew immediately that his turn three crash had resulted in a dislocation – the big fear was if the shoulder had been broken. On the scene, Crump and the paramedics attempted to re-engage the shoulder but were unable to, forcing the British-based Queenslander to hospital.

The three-times World Champion – like most riders – was having difficulty seeing, let alone racing on the circuit.

“I just couldn’t see a thing going into the third bend, in those conditions it’s pretty difficult to save anything and before I knew it I was hitting the ground,” he said.

Crump has had a horror start to his campaign – freely admitting getting used to a new silencer adopted by the FIM is taking some time to get the tune correct on his machines.

The injury has compounded Crump’s season further. He currently lies 10th in the Championship chase and will be working to get fit before the next race on May 28 in Prague – a venue he was undefeated at between 2002 and 2004. Further igniting Crump’s push for glory – fellow Australian Chris Holder took victory in Gothenburg.