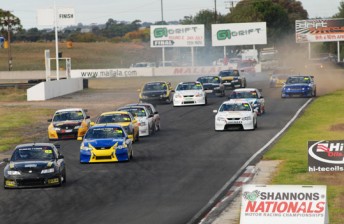 The only blip on the Lubrimaxx Falcon BA driver’s weekend was a spin in Race 2 – courtesy of a tap from Scott Loadsman (Beautiful Tiles Commodore VY) at the Northern Hairpin.

Wyhoon, who fought from the back of the grid to third in Race 1 on Saturday, saw his chances of the round victory disappear at the start of Race 3 – with the former NASCAR racer stalling on the start-line.

The weekend ended in a disappointing double-DNF for the Garioch brothers in Race 3, with Nathan suffering a broken steering rack and Justin a broken fuel pump.

Earlier in the day, Justin Garioch had appeared set for third in Race 2 before spinning down to 10th at the final corner with a deflating tyre.

The title race continues with the Shannons Nationals at Eastern Creek on July 16-17.