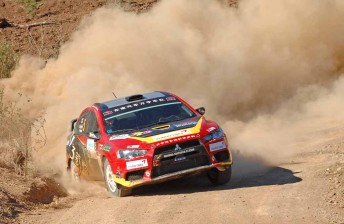 The Manxman (Isle of Man) broke away from a three-way battle for the lead to win the event by just under 16-seconds in the Mary Valley forests north of the Sunshine Coast.

Atkinson retired after the first stage this morning with a repeat of the electrical problems that sidelined him and Belgian co-driver Stephane Prevot yesterday; while McRae and Bill Hayes were slowed over two stages after a water splash caused their car to stall and then misfire.

McRae dropped from the overnight lead to finish fourth.

A sensational time on the final test of the event by Smart leapt him from third to first. Dowel and Pedder finished the event on the same time to both be placed second on time.