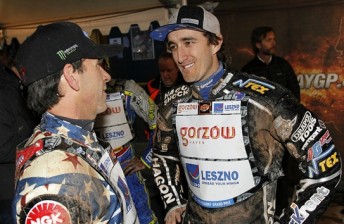 Aussie Speedway star, Chris Holder has taken his second Speedway Grand Prix career victory in a rain-sodden Gothenburg and has surged to fifth in the SGP standings.

So wet were conditions, the meeting had to be abandoned after 16 races and unfortunately for Holder, just the points scored in the heats counted towards the World Championship pointscore.

It was a rough night for the other Aussie in the World Championship – three-times title holder, Jason Crump, who suffered an injury to his right shoulder after a massive crash in heat 10.

This continues Crump’s nightmare start to the 2011 season, languishing in 10th placing on just 11 points in total.

Current World Champion, Tomasz Gollob remains at the head of the standings, despite walking away from Gothenburg with just six points.

American veteran, Greg Hancock drew level with the Pole by virtue of his second placing in the Swedish meeting.

Hancock has been in dazzling form thus far in 2011 and ran Holder to the wire in heat 14 – the decisive race that placed the Aussie in the highest points position.

“I’m stoked, you’ve got to have luck – fortunately it worked out for me this time,” Holder said. “The conditions were terrible and I just had a great run. I had all the (starting) gates and just made good decisions with the bike. I used my head.”