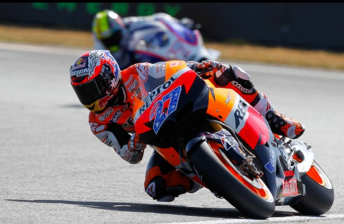 Stoner was an easy winner at Le Mans

Casey Stoner put a pre-race fine behind him to dominate the French Grand Prix at Le Mans.

Relieved of €5000 following a morning warm-up blocking incident that saw Stoner punch local rider Randy de Puniet, the Australian battled with team-mate Dani Pedrosa in the opening laps of the race before easing away towards half-distance.

Stoner’s win was all but assured when Pedrosa fell while battling for second with Marco Simoncelli with 11 laps to go.

Simoncelli had caught and passed his Repsol-backed rival, before turning into Pedrosa as the Spaniard tried to reclaim the position.

The incident saw Pedrosa crash, breaking his collarbone, while Simoncelli continued before being handed a ride-through-penalty for an ‘illegal manoeuvre.’

The Italian rejoined the race in seventh position, but recovered to fifth by the flag.

Further up the road, Andrea Dovizioso fought off a late challenge from Valentino Rossi to take second, while Jorge Lorenzo was fourth.

It was a shocking race for the Tech 3 Yamaha and Pramac Ducati squads – with both teams seeing their two riders crash during the race.

The result sees Lorenzo lead the championship with 78 points, ahead of Stoner (66) and Pedrosa (61).

CLICK HERE to view the championship standings after four races