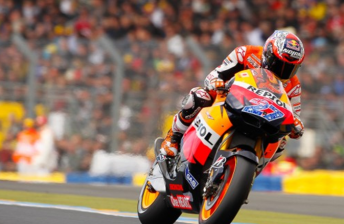 The Repsol Honda rider led the way for the majority of the 60 minute qualifying session – setting consecutive laps of 1:33.26s and 1:33.15s inside the final three minutes to cement his position at the top of the table.

A last gasp effort from Marco Simoncelli saw the rapid Italian fall short by just 0.059s, while Andrea Dovizioso and Dani Pedrosa made it a Honda clean-sweep of the top four positions.

Reigning World Champion Jorge Lorenzo was fastest of the non-Hondas on his factory Yamaha in fifth position – albiet some 0.55s adrift of Stoner.

Tech 3 Yamaha twins Cal Crutchlow and Colin Edwards were next, while Ben Spies, Valentino Rossi and Nicky Hayden rounded out the top 10.

Randy de Puniet, Karel Abraham and Toni Ellias all walked away unscathed from crashes during the session, with de Puniet falling at the third-last corner just eight minutes into the session.

Benefitting from the latest Ohlins front-forks tested after the Portuguese Grand Prix, Stoner has now taken three out of a possible four pole positions this season.