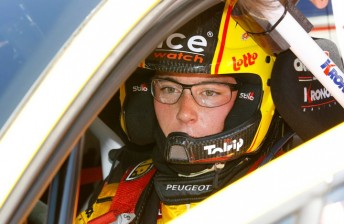 Thierry Neuville will take an advantage of almost nine seconds into the second day of the Tour de Corse-E.Leclerc following a dominant start to the Intercontinental Rally Challenge (IRC) event.

Driving a Team Peugeot Belgium-Luxembourg 207 Super 2000, the 22-year-old was fastest on both runs through the 27.53-kilometre Le Fangu-Notre Dame de la Serra test, which overlooked the Mediterranean Sea and formed the opening day of the legendary three-day rally, billed as the Return of the Myth.

Held in bright sunshine in ambient temperatures approaching 30 degrees centigrade and with ground temperatures peaking at 38 degrees, stages one and two provided an early test for the IRC contenders.

Despite reporting that his car’s set-up was not entirely to his liking on the bumpy section of the opening stage, little troubled Neuville and co-driver Nicolas Gilsoul, particularly following a spate of changes to his machine at mid-afternoon service, which included adjusting the suspension and ride height.

Jan Kopecky is second overnight in his Skoda Motorsport Fabia S2000, 8.9-seconds adrift of Neuville and 3.5-seconds ahead of Bryan Bouffier, who moved into third place at the expense of Andreas Mikkelsen with a faster time than the Norwegian through stage two.

Bouffier was troubled on stage one by a loose steering wheel in his Peugeot France 207 S2000, while Mikkelsen admitted to adopting a low-risk strategy on stage two.

Freddy Loix is fifth at the end of day one in his BFO Skoda Rally Team Fabia. The Belgian veteran made his customary cautious start to an event but soon rediscovered the pace that has taken him to six IRC victories with the second fastest time on stage two after stiffening his car’s rear suspension settings.

Guy Wilks completes the top six at the wheel of his Peugeot UK 207. The Briton was fifth after stage one, despite suffering a spin approximately eight kilometres into the stage, but fell behind Loix on the next test after admitting he wasn’t able to commit in some sections as he would have liked.