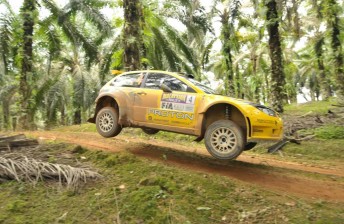 Australia’s biggest championship rally of the year, the International Rally of Queensland, blasts into action around the Sunshine Coast this evening.

A record entry of 96 cars, including 16 from overseas, are ready to tackle 19 timed stages over 231 competitive kilometres and two nights and two days, starting with the Caloundra Rally Shootout presented by Caloundra RSL and Hella tonight.

The Caloundra super-special stage, run under lights on a 2.26 km temporary tarmac course around the Sunshine Coast Industrial Park, is expected to attract thousands of spectators.

The cars will return for a second run on Saturday night, after completing the first of two days’ competition on forestry roads around Imbil, in the Mary Valley.

Teams have conducted two days of high-speed testing and a day of reconnaissance in the forests this week to prepare for the rally, regarded as one of the most challenging on the calendar.

Form appears to favour the Protons, for which Australian Chris Atkinson finished first and Perth-based Scotsman Alister McRae third in the first Asia Pacific round in Malaysia last month.

The 2011 versions of the Proton racers are more powerful and nimbler, but Atkinson says the field is the most competitive in years.

“We had a great test earlier this week and I’m happy with the car but my teammate Alister and the Chinese team’s Mark Higgins are both British champions and will be tough to beat,” said Atkinson.

“Then there’s the two Indian MRF team guys Guarav Gill and Katsu Taguchi, plus Rifat Sungkar from Indonesia in a car from Japan.

“Half a dozen guys could win.”

Gates open for the Caloundra Rally Shootout later today at 5.30pm, before the first car hits the track at 7pm.