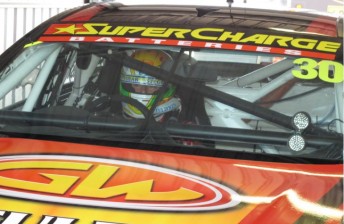 Courtney behind the wheel of the #30 Commodore

Lucas Dumbrell Motorsport’s Warren Luff will be looking for an improved showing at next weekend’s Winton 300 after James Courtney drove the Gulf Western Oils Commodore at the Victorian circuit today.

The reigning V8 Supercars Champion took to the #30 Walkinshaw Racing-built Commodore for 10 laps around the 3.0km circuit – the maximum laps permitted under V8 Supercars testing regulations.

Luff is currently 28th in the V8 Supercars Championship and has not troubled the top runners during the opening nine races of the season.

Luff says that having Courtney’s help will be invaluable. “It was good to get a bit of feedback from James,” he told Speedcafe.com at Winton.

“We’re part of the Walkinshaw family. As a one-car team, things can be tough, so it was good to get someone else’s perspective.”

Luff and Courtney drove together in the three endurance races at Phillip Island, Bathurst and Surfers Paradise last year. The pair’s best result during the three meetings was fifth place in the Bathurst 1000.