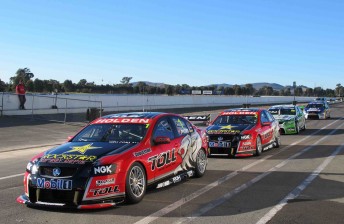 The Toll HRT and FPR entries prepare to hit the track

Fourteen V8 Supercars will take to Winton Motor Raceway today as teams prepare for the upcoming championship event at the venue.

Nick Percat, who yesterday was announced as Garth Tander’s co-driver for the endurance races, will turn laps in his #222 Coates Hire Commodore – the only Fujitsu Series entry at the circuit.

Several of the championship teams will use today to give valuable miles to their endurance co-drivers.

The teams will be able to test with both the Dunlop Control and Sprint tyres from their tyre banks, with all teams having new or near-new examples of the softer rubber left-over from the Abu Dhabi and Barbagallo events. 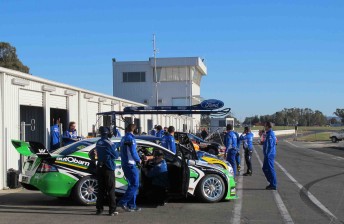 The Sprint tyres not used due to the wet weather in Hamilton are not available to the teams however, due to a delay in the return of the tyres from New Zealand.

Ford Performance Racing will return to Winton for a further test day on the Tuesday after the Winton 300, and will be joined by Brad Jones Racing.

The endurance co-drivers will get a chance to take to the track during the Winton 300 event itself – with a co-driver session to be held on Friday.