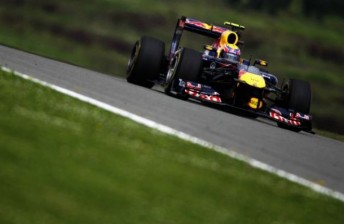 Mark Webber says he was surprised to be fighting with a resurgent Fernando Alonso and Ferrari during the Turkish Grand Prix.

The Australian finished the race in second position, just 1.2s in front of Alonso, after passing the Spaniard inside the final ten laps.

The double World Champion had played down the Scuderia’s latest array of aero updates heading into the weekend – with few expecting such a competitive showing from Alonso in the race.

Both drivers had to contend with the Mercedes of Nico Rosberg in the early going, which allowed pole sitter and eventual race winner Sebastian Vettel to establish a comfortable gap in the opening laps.

Webber had dropped the position to Rosberg off the grid – a situation the Australian put down to starting on the dirtier side.

“I think the start wasn’t that easy over on that side of the grid which we probably expected a little bit, but it’s not the end of the world, as we saw in the last race starting from 18th – it doesn’t really matter if you’re on the dirty side or whatever if you’re at the front,” said Webber.

“I spent a couple of laps trying to clear Nico, which is never ideal as Seb got a bit of a gap. I was a little bit on the back foot from there.

“I cleared Nico, and then the guys pitted me probably a couple of laps earlier than I expected, because I knew that the undercuts were coming into play, and there was a gap for us to come into.

“That’s the way it went, and really we made our bed in terms of strategy from then on.

“The fight with Fernando in the middle of the race was a little bit unexpected – I think he drove fantastic today and it was a good fight for both of us.

“Obviously we used the DRS to get the moves done, so that was part of it, but the tyres played a huge role in the end there. I had a fresher set of tyres (saved) from qualifying and that was it really.”

“I think we did a good weekend overall,” said Alonso.

“The car performed a bit better than we did in the first three races of the championship, so finally we are racing again, and we enjoyed a race fighting for the podium positions.

“We lost a bit of time behind Rosberg at the beginning of the race, so without anymore the possibility to fight with Sebastian for P1, we concentrate on P2.

“I had a little bit of an advantage in terms of tyre degradation maybe in that part of the race compared to Mark, and we use the DRS to overtake him.

“Then in the last part of the race, it was more or less the opposite where we were at a disadvantage with tyre age, and we lose the position again.

“But it was ok I think. Fighting with Red Bull in this race was quite difficult, and we were close, so hopefully next time we try again.”