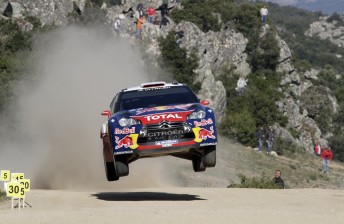 The Frenchman began Saturday’s first stage with an advantage of 33.2s in his Citroen DS3 WRC. Despite having to clean the road of the loose surface gravel for those running behind, Loeb was able to minimise any potential time loss throughout the day.

After completing the day’s final stage, the 14.21-kilometre Su Filigosu test, he suggested his overnight lead of 28.3s might be enough to ensure win number two of the all-action 2011 season.

“It’s really difficult to accept losing time when you are cleaning the road in difficult conditions but we had to keep concentrated and continue to believe it would be okay. Twenty-eight seconds should be enough but it’s still a difficult day tomorrow.”

But while Loeb is eyeing his fourth victory on the Mediterranean island, a thrilling battle is raging for second place with Mikko Hirvonen, Sebastien Ogier and Petter Solberg covered a little more than 10 seconds heading into Sunday’s final quartet of stages.

Hirvonen is second in his Ford Fiesta RS WRC, 6.3s up on Citroen driver Ogier with Solberg a further 4.9s behind in his DS3.

“Sebastien [Loeb] was very fast in the last two stages and I wasn’t really able to take much time out of him,” said Hirvonen.

“Petter and Ogier are very close and we will all have to go flat-out tomorrow and that will keep the pressure on Sebastien. You never know what will happen.”

Solberg, meanwhile, suggested his time loss with a puncture on Saturday’s second stage has ended his hopes of victory but he remains firmly on course for his first podium of 2011.

Mads Ostberg is fifth overnight having overcome a few handling issues in the morning and a minor scare on Saturday’s final test when a steering arm worked loose on his M-Sport Stobart Fiesta.

Dani Sordo has completed day two in an impressive sixth overall in his MINI John Cooper Works WRC. The Spaniard reported a throttle problem during the afternoon but was more fortunate than team-mate Kris Meeke who stopped on the day’s second test when his car developed a water leak.

One of the stars of day two, however, was factory Ford driver Jari-Matti Latvala. The Finn restarted under SupeRally regulations this morning following his retirement on day one. He gave an indication of what might have been when he went fastest on five of the day’s six special stages.