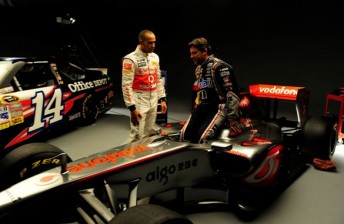 Orchestrated by Mobil 1, a common parter of McLaren and Stewart-Haas Racing, the event will mirror the swap between Jeff Gordon and then-Williams driver Juan Pablo Montoya at Indianapolis in 2003.

While Montoya switched to a full-time NASCAR schedule within three years of his drive, Hamilton says that the emphasis will be on fun when he takes the wheel of the #14 Chevrolet on June 14.

“Tony and I will have some fun with the swap and make sure we put on a good show,” said Hamilton.

“American race fans are massively enthusiastic about motorsports, so I hope to see a lot of them down at The Glen to see it firsthand.

“It’s a racer’s circuit and will give us both the chance to understand the differences between the two styles of racing at this legendary track.

“Watkins Glen also has a particular connection to the team, as it is where McLaren won our first Drivers’ and Constructors’ World Championships in 1974 with Emerson Fittipaldi.

“I’m looking forward to getting back there with the latest generation of McLaren’s machines!”

Stewart is no stranger to open-wheel cars, having won the Indy Racing League championship in 1997.

While Stewart may find the McLaren a tight squeeze these days, the Indiana native says he’s excited about the drive.

“When you’ve been around competitive racing for as long as I have, you really look forward to new experiences,” said Stewart.

“This car swap with Lewis is definitely one of those opportunities.

“I already have quite a bit of respect for what Lewis and the F1 drivers and teams do, so to experience laps in the cockpit of a F1 car and see what Lewis can do in the Cup car is something I am really excited about.”