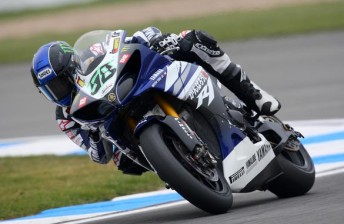 Factory Yamaha’s Eugene Laverty has taken his debut World Superbike win at Monza just a stone’s throw from his team’s headquarters in Italy after fending off the attentions of Max Biaggi and Leon Haslam until half distance before running away as the two old stagers tripped each other up.

The young Irishman eventually crossed the line 1.5s ahead of the Roman Emperor after knocking off the throttle on the last lap but it was a masterclass in consistent laps while the pack behind’s in-fighting allowed him to disappear into the middle distance.

As Biaggi, Haslam and the second Yamaha of Marco Melandri tripped each other up for the podium places, with the Aprilia man making mistake after mistake on the brakes into two of three chicanes, Laverty was able to creep away for the win.

Haslam was seriously frustrated with Biaggi as he used the top speed of the RSV4 to make up for his errors while a hard move by Melandri into the Prima Variante on lap 13 of 18 left the Derbyshire man with no choice but to go straight on, losing the tow to the leading pair in the process and he had to settle for third.

Melandri took fourth but was only a tenth behind Haslam while SAklstare Suzuki’s Michel Fabrizio had a lonely ride for fifth after carving his way through the pack, picking off Troy Corser and Jonathan Rea halfway through the encounter.

Castrol Honda’s Rea found himself in a scrap with the wily Aussie, swapping sixth place on laps 16 and 17 before the Irishman forced his way past the BMW while Leon Camier, who had electrical failure in morning warm-up, just got the better of series leader Carlos Checa on the last lap for eighth.

Jakub Smrz rounded out the top ten with PBM Kawasaki’s Tom Sykes in 13th. Noriyuki Haga was handed a ride-through penalty for cutting chicanes and that dropped him from sixth to 16th while Joan Lascorz crashed unhurt.