Vettel does it again in Istanbul qualifying

Vettel does it again in Istanbul qualifying 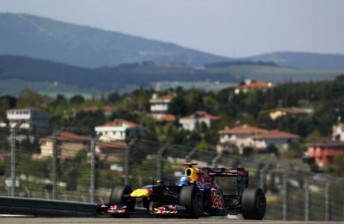 Sebastian Vettel has taken his fourth pole position of the season in an anti-climactic end to qualifying for the Turkish Grand Prix.

Mark Webber’s best was good enough for the front-row, despite being 0.4s shy of Vettel – with the two Red Bull drivers having completed just one run each in the final Q3 session.

While the team-mates both saved a set of soft tyres by ending the session in the garage, Nico Rosberg put in a late flier to take third from Lewis Hamilton.

Fernando Alonso, Jenson Button and Vitaly Petrov filled fifth through seventh, while Michael Schumacher and Nick Heidfeld were eighth and ninth having completed single runs late in the session.

Felipe Massa, who had used the soft tyres to ensure he made it to Q2, did not turn a lap in the final session and will start 10th.

Q2 had seen Heidfeld claw his way into the top 10 after the chequered flag had fallen – bumping the Williams of Rubens Barrichello from 10th position by just 0.024s.

Earlier in Q1, Jerome D’Ambrosio again outshone Virgin Racing team-mate Timo Glock. The Belgian rookie set the 20th fastest time, but will start last on the grid due to a penalty for not slowing down sufficiently under the yellow flags for Pastor Maldonado’s crash in Practice 2 yesterday.

Hispania continued to show signs of improvement, with Tonio Liuzzi out-qualifying Glock for the first time this season.

There was bad news for Kamui Kobayashi, with the Sauber suffering from fuel pump issues that prevented the Japanese driver from setting a time.

See below for the session result