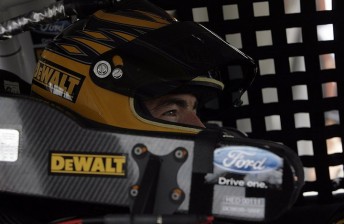 Australia’s Marcos Ambrose will start the Showtime Southern 500 at the famed Darlington Raceway in South Carolina from sixth position.

Pole was won by Kasey Kahne in the Red Bull Toyota with Ryan Newman (Stewart-Haas Racing) to share the front row.

Ambrose set his qualifying time on the final of his two timed laps in his Ford Fusion.

“I knew what I needed to do on that second lap, but I just wasn’t sure I was gonna be able to do it,” said the Tasmanian.

“I was basically wide-open through turns one and two and the car stuck.  I’m just so proud of my Stanley team and everybody at Richard Petty Motorsports.  It’s just a really good moment for us and something we can reflect on and be proud of.”

‘The Track too tough to Tame’ Darlington is also known as ‘The Lady in Black’ with each end of the oval track a different shape. At some stage in the race each driver is expected to scrape the wall and earn a ‘Darlington Stripe’ on the side of the car and leave a black tyre mark on the fence.

The Showtime Southern 500 will be run 9am Sunday morning Eastern Australian time.