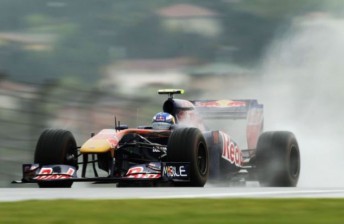 Ricciardo at speed in the STR6

Having also placed among the established Formula One stars during a wet test at Barcelona earlier this year, Ricciardo is quickly garnering himself a healthy wet weather reputation.

“This was my very first time driving at the Istanbul track and the session went well giving me an understanding of why drivers are so keen on this circuit, with all its undulations and different types of corner,” said Ricciardo.

“I enjoyed it, even if the conditions were not ideal.

” It was useful to drive in the wet, because this was only the second time I’ve had that experience after a few laps at Barcelona in winter testing. I felt confident and comfortable.”

The positive day comes a week after Ricciardo endured a tough start to his World Series by Renault campaign at Spa.

Joining the championship at its second round (having missed the first due to a clash with the Malaysian Grand Prix), the ISI Racing driver crashed heavily in qualifying before scoring 10th and ninth place finishes across the two races.