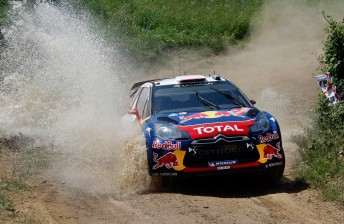 Although the Citroen DS3 WRC driver will take a lead of 33.2s into Saturday’s six all-gravel stages, he could have opted to drop time on Friday’s final test to gain a more favourable road position for Saturday when the roads are more soft and sandy in nature compared to the harder surface experienced on day one.

“It will be difficult tomorrow but I will see what I can do,” said Loeb.

“But I prefer it like this with a big gap to the others behind me.”

Citroen privateer Petter Solberg completed day one in second overall but said he could have been closer to the front had he not dropped more than 40 seconds when his car’s turbo boost pipe worked loose on stage two. He’d gone fastest of all on the opening stage.

“I’m fed up with tactics so I just wanted to push and I’ll push again tomorrow,” said Solberg.

Mikko Hirvonen had been embroiled in a close fight with Loeb for first place only to suffer a right-rear puncture on stage seven. After Sebastien Ogier, in the second factory Citroen, elected to slow on the final stage, Hirvonen moved into third, 53.1s adrift of Loeb.

Mads Ostberg dropped time on Friday afternoon with a brake problem but holds fifth overnight in his M-Sport Stobart Fiesta. The Norwegian is one place in front of Spaniard Dani Sordo in the factory MINI John Cooper Works WRC.

“Honestly I’m really happy with the performance of the car,” said Sordo.

“I pushed the car in the afternoon, slid more and was more aggressive with the car. The car really is not bad for the first time and we did not have any problems.”

Sordo is the sole works MINI runner to complete day one with team-mate Kris Meeke retiring on stage three.