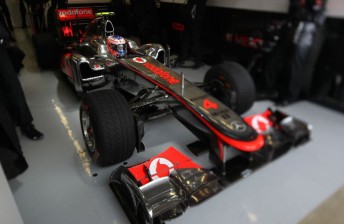 Mercedes-powered cars have dominated the opening day of running in Istanbul, with McLaren’s Jenson Button emerging as the fastest man.

World Championship leader Sebastian Vettel had the worst possible start to his weekend – crashing heavily at the feared Turn 8 during the morning’s wet session.

While Vettel walked away unharmed from the incident, the German’s RB7 was not able to turn a lap in Practice 2.

Vettel’s team-mate Mark Webber finished the day fifth fastest, having been 11th in the earlier session.

The afternoon saw Turn 8 catch out Williams rookie Pastor Maldonado, with the Venezuelan finding the barriers after losing control on a damp patch.